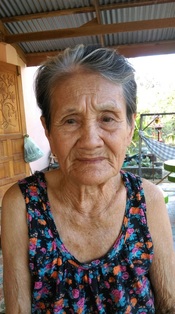 Getting married when 18 years old to a man from Ubon Ratchathani city with her husband being head of education in the Provence.  Birthing 5 children , all boys  living in Ubon Ratchathani they boy grew up and got involved into drugs. Police told her to leave the town or the boys life will be finished. She moved back to a smaller village close to her home village with her husband after he resigned from the Government position. One son had a car accident and died, the following year another son had a car accident and died, the year after that another son died from some mystery related to poison. 3 years later her husband died from too much alachol then the following year another son died from alchol …. Being left now with 1 son that is handcapped from alchol and a grandson living on the land. How does she manage herself to be healthy, happy and still smiles at 82 years old. Every event, ceremony holds a tradition that has a deeper value than most of us understand. There is a reason, a connection for events, ceremonies regardless of the reason to have one. Grandmother Kheam helps to guide what is needs for each event, ceremony in the village and neighbouring villages.  It is common knowledge she has to be invited to every ceremony/event.