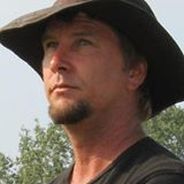 Mr. Steven Burgess aka Lee Wei-De is an accomplished teacher of martial arts and Chi Gong.  At the age of 16, He was studying Kung Fu, and he became a third degree black belt of the Hwarng Do-Dim Mak style of Kung Fu.  Hwarng Do translated, means ‘the path of the flowering man'​; Dim Mak, translated, means ‘nerve touch or touch of death.’  A warrior’s path is a life long path of balancing the healer and the warrior archetypal energies.  Steve respect and appreciation for the martial arts taught by Jok Sang martial arts in Australia lead him to study the healing arts in the Jok Sang teachings of Chi Gong, Massage, Osteopathic Manipulations, Acupressure, Bowen Therapy, Moxibustion, Herbs, Energy Transfer methods, Auric and Psychic Colors, Focus, Meditation, Morals, Pranic Healing, Spirit and Soul.

The name, Brahmajarn Lee Wei-De, was given to him by a Taoist master during studies of the martial and healing arts; the name translates respectfully as follows, Brahm - Spiritual, Ajarn - Teacher, Wei - Greater, and De - Moral, Spiritual Teacher of Greater Moral.  Mr. Lee Wei-De integrates and combines therapeutic approaches to create healing sessions that are specifically tailored to address the needs of individuals in their healing sessions.

A Reiki Master Teacher certified in Australia, founder of Siam Reiki, and member of the World Reiki Confederation, Steve has trained over two hundred student in Siam Reiki, to level three (Master), attuned by the traditional "Usui Shiki Ryoho" Reiki and delivering the personal energy development methods included into Siam Reiki to competently classified as Professional Therapists.  Currently, twenty-nine of his students are qualified Reiki teachers.

In the year, 2010, the Board of Directors of Siam Traditional Doctors Association proudly elected, Mr. Lee Wei-De (Steven Burgess) to be president of Siam Traditional Doctors Association, STDA.  The STDA Board is composed of traditional Thai herbal doctors and its members.     Mr. Lee Wei-De has been living and traveling a path of traditional studying and experiential learning that started in his teenage years and continues today.  He dedicates his free time into research and being a mentor to other teachers.  Mr. Lee Wei-De has developed training programs for teachers, and he has developed course curriculums for various institutions. ​
He is a member of the Seven Generations World Wisdom Council that was assembled during the Wisdom Gathering of 2012 Holland.  The World Wisdom Council is composed of Wisdom Keepers and Elders who assist and facilitate ceremonies and traditional teachings at World Wisdom Gatherings around the world.  The aim and aspiration of having World Wisdom Gatherings around the world, is to create, develop, and or expand understanding of the common grounds and interests of our world’s community for the good of all beings, and to support all life, for at least seven generations to come.  Thank you, for being.
​